In my article on line-drying laundry, I verbally described these handy clothesline hangers that can be made out of scrap lumber and installed in any place that has exposed rafters/joists in the ceiling.  I finally decided to share some photos of them, since this is the kind of thing that really is easier to understand if you can see what I’m talking about–particularly if you never saw one before.  (I am sorry about the poor lighting–our basement is dim, and I made this post on a sudden inspiration, using my iPad which has no flash–but I think they’re better than no photos at all!) 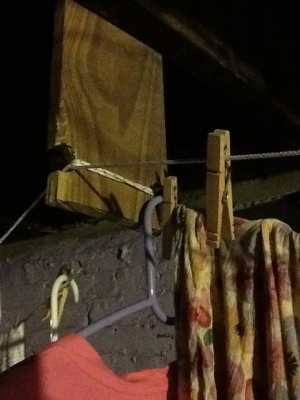 The way to make these is to

If there’s space, you can hang a third board another 6-12 feet away and run another line around that one and the middle one.  The second photo above shows a middle board with clotheslines running in both directions.  It’s also possible to extend one loop of clothesline perpendicular to the board and another at an angle (45 degrees or less) so that your clotheslines form a V.

Daniel made these when we moved into our house 10 years ago.  They have needed no maintenance except for tightening the screws once when we noticed that the boards had begun to wobble.  The apartment building where we previously lived had clothesline hangers like these already installed–they appeared to be many decades old but were holding up just fine.

We have 5 hangers holding clotheslines in a V, for a total of 8 sections of line, each about 10 feet long.  This is enough hanging space for 2 huge loads of laundry, or 3 loads if many of the items can go on hangers.

Please let me know if the photos need improvement–and tell me what’s unclear about them, what you can’t figure out from seeing them–I could try again!

(I apologize to my subscribers who received notification of an untitled post and, if you viewed it while it was still up, found that it contained only these photos with no explanation.  I loaded the photos via the WordPress app for iPad, and then my only choices were “publish” or “cancel” and it was time to walk my kid to school, so I was out of time to figure out how to save the post as a draft!  Sorry for the confusion.)

6 thoughts on “Clothesline Hangers for Basement or Porch”