Ah, December, the month when the days are getting shorter and shortest as we try to pack in shopping, parties, preparations for hospitality or travel, and tranquil spiritual contemplation along with all our usual activities!  It makes a kid who persistently wants attention all the more annoying.

The December my son Nicholas turned two, I found a great way to get him to use his imagination, work out some of his physical energy, and leave me alone just enough that I could wash the dishes!  It also boosts my holiday spirit and gives me a nice feeling of being a classy, educational sort of mom.

Most of us are familiar with The Nutcracker as a ballet, a theatrical event that we might attend annually or only when somebody we know is in it.  But it’s also a musical composition by Pyotr Ilyich Tchaikovsky that is beautiful and tells a story even when you have only the music.

We happen to live just blocks away from the incomparable Jerry’s Records, so I picked up The Nutcracker as a two-record set for $4. 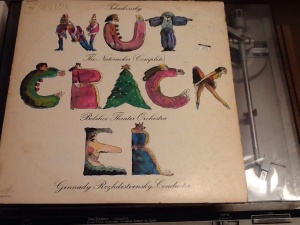 I explained to Nicholas that this music tells a story which I have seen performed on stage many times.  Then I played the records while I was washing dishes and narrated the story for him: “Now the curtain goes up, and you can see the elegant room with a big Christmas tree and everyone dressed in old-fashioned party clothes.” . . . “Clara and Fritz are fighting over the nutcracker, and–Oh! It broke!” . . . “The tree is growing bigger and bigger.  Now its lights are the only lights.  Clara is alone in the big dark room.”  Nicholas was enthralled.

I grew up seeing The Nutcracker every year, performed by the local small-town ballet school plus some guest artists.  Over the years I watched my ballet-student friends perform as party guests and mice, soldiers and ginger cookies, snowflakes and flowers, and senior year my friend Stacey got the Arabian lead.  Every year something was a little different in the staging, but I formed a sort of prototypical Nutcracker in my mind, which comes vividly to life every time I hear the music.

I’m not very musical, but I’ve learned to recognize bits of that music as representing specific parts of the action, in some cases by “hearing” the words that go with it: Clara’s dance with the nutcracker is, “He’s my doll, he’s my little doll!”  The Christmas tree has its own part of the music, “It’s growing!  It’s growing!”  When all the Act II characters come out and dance a little more and take a bow, that’s, “Now it’s over! Well, it’s almost over; it’s such a long show but now it’s alllmost donnne, alllmost donnne…”  Nicholas thinks this is very silly of me.

Anyway, I never get tired of hearing the music again (unlike, say, the Sesame Street Christmas record…) and there are some parts that always give me chills.  This music is magical.

The second time we listened to The Nutcracker, Nicholas told the story back to me as he leaped around the kitchen: “Now mice fight with big knives!” “Snowing more and more!” “Dancing cookies!”.  He didn’t have all the scenes aligned correctly with the music, but that was fine–he was using his imagination, he was getting the basic idea that the music says what’s happening, and he was having so much fun that I was able to spend my time washing dishes instead of lying in his bed reading stories and hoping I could stay awake long enough to do dishes.

Just before his third birthday, we took him to see The Nutcracker performed by Pittsburgh Ballet Theatre.  We’ve since seen their production many times, and last year we visited my parents at the right time to see their local production, and this year we saw Pittsburgh Youth Ballet’s version.  All of them were wonderful.  But I’m glad that I introduced Nicholas to The Nutcracker as a piece of music first.  We didn’t take his baby sister to see it with us this year.  Instead, as I rock her to sleep this month, I am playing our Nutcracker records and whispering to her about what we hear.  I hope it will be magic for her too.

The music of The Nutcracker works for me!

2 thoughts on “The Nutcracker: music for the imagination”