Did you make a new year’s resolution to waste less food, to do more cooking from scratch, or to buy less over-packaged food?  If you did, or if you have ever bought a canister of ready-to-use breadcrumbs, this article is for YOU!  And if you don’t fit into any of those categories, but you do eat bread and there is any chance that you’ll ever make a recipe that uses breadcrumbs, you should read this, too!

The thing is, breadcrumbs are just bread, made into crumbs.  It’s easy to do!  When you buy breadcrumbs, you’re paying to have machines crumble the bread for you and pack it in a container.  Crumbs are much more expensive than the number of slices of bread required to make that many crumbs.  Furthermore, when you buy crumbs as a separate product, you’re buying different bread than what you already have at home (some of which likely goes to waste from time to time, when it gets stale before you can eat it or because nobody likes to eat the bread heels) and you’re buying whatever quantity comes in a package–so after using the amount you need in your recipe, you’re likely to have some left, and if you can’t think of a use for them quickly, they’re going to go to waste, too. 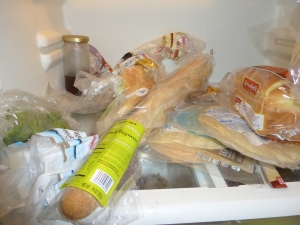 Here’s what was on the bottom shelf of our refrigerator one Saturday last fall when my son Nicholas (then 10 years old) decided to document in photos our process of converting unwanted bread into useful breadcrumbs.  In the center is an entire baguette that my partner Daniel bought, planning to make a specific sandwich–but then he got sick for just a couple days, and a baguette gets stale very quickly!  You also can see other bread bags, one with the current half-used loaf of bread but most nearly empty.  We took the heels out of that half-loaf bag but left the rest of the slices for our fresh-bread uses.  (Also on the shelf are tortillas, a jar of olives, and some kind of parsley or something, which you can just ignore.)

The first step is to inventory your breads and sort out what is no longer good for fresh eating but could still be used for crumbs.  Discard any bread that looks or smells moldy.  But bread that is damp from being in the refrigerator can still be salvaged! 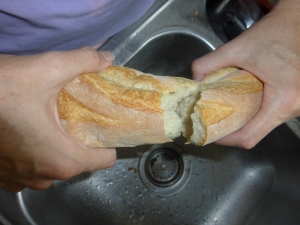 If bread is so hard that you can break it, with difficulty, making a cracking sound, it’s ready for immediate crumbing. Our baguette was hard as a rock!  I was breaking it over the sink so that the crumbs wouldn’t fly everywhere–but now that I think about it, the most frugal way would be to break it over a large mixing bowl so that the crumbs that drop off could be included in the final haul of crumbs.

Bread that is not completely hard and dry will need to be toasted. Put the toaster on a medium-light setting and toast repeatedly any bread that is not crisp after the first round. This works better than using a too-dark setting that could burn your bread. 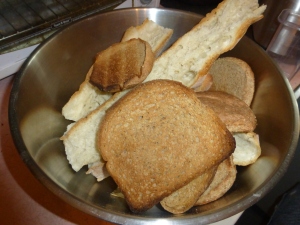 At right is our assortment of bread after toasting.  You can see that this includes some whole-wheat bread, some white bread, and a burger bun.  Unless your recipe is extremely specific about what kind of breadcrumbs are needed, you can mix various breads together.  Just be wary of any seeds that might change the flavor of the finished food.

If you don’t have a food processor or blender, probably the best way to reduce your bread to crumbs is to seal it in a bag and smash it with a heavy object.  Once you have smaller pieces, roll the bag back and forth, pressing it down hard against the counter with your hands or a rolling pin, until the crumbs are small enough for your purposes. 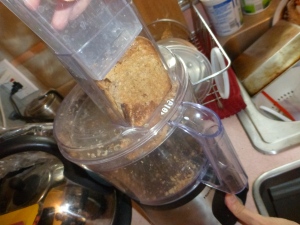 If you do have a food processor, use the grating blade and demolish those breads!  [Gosh, we have a lot of background clutter in our tiny kitchen!  Sorry about that.]  I’ve gotten much more evenly-sized crumbs using the grater–which is at the top of the processor so that everything passes through it once–than using the standard whirling double blade, which demolishes whatever it touches but doesn’t necessarily touch everything in the processor and allows large chunks to pass below it.

A blender also makes good crumbs quickly. Make sure there is no moisture around the blade before you begin. Put in small amounts of bread at a time, and shake out the crumbs periodically so that the newly added bread drops right into the blades–otherwise, the crumbs at the bottom will get very small before the bread at the top is broken up. 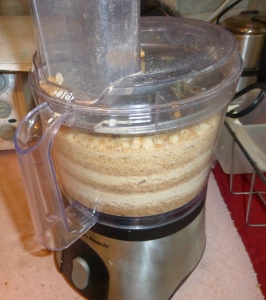 Our variety of breads made pretty layers of crumbs in the food processor!  The array of bread pictured above made 12 cups of crumbs. 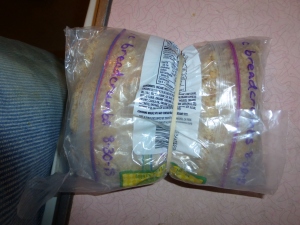 After setting aside any crumbs you are going to use right away, pack the rest of your finished crumbs into freezer bags in convenient portions.  Ours are 2 cups each.  Squeeze out all the air, starting from the bottom corners, before sealing the bags.  Then put these bags inside another bag and squeeze the air out of that, too.  Double-bagging helps keep your crumbs dry in the freezer.  Of course, to be thrifty and eco-friendly, you will reuse plastic bags, perhaps even the same bags that were storing the original bread.  If a bag doesn’t have a zip-top, put a rubber band around it, as shown.

Now you will have breadcrumbs ready to thaw for future cooking projects!  It’s best to store them in the freezer door so they don’t get mashed by heavy packages of frozen food.  Try to use them within 4 months for best results.

We use breadcrumbs mostly in homemade veggie burgers and as a topping (mixed with paprika and parsley) for baked fish.  They’re also good for breading things that you’re going to fry or as a casserole topping.

11 thoughts on “Get FREE Breadcrumbs for All Your Recipe Needs!”