Our two-year-old Lydia has always been the type who takes a while to wind down, but in the late spring after she stopped nursing, she went pretty easily into a relatively smooth routine of listening to several stories and then saying good night and lying alone in her bed in the dark listening to a story CD as she fell asleep.  She was napping inconsistently, but at least we could get her to bed for the night in a predictable way.

Then, at the end of June, I finished my job and the next day we traveled to visit my parents in another time zone for a week, and then when we got back our daytime routine relaxed because I didn’t have to get to work and get Lydia to childcare–and her happy routine disappeared.  She started freaking out when we turned out the light, screaming and crying and refusing to stay in bed.  Some nights she’d lie quietly if a parent stayed with her, but other nights she’d flip around, literally trying to climb the wall next to the bed and falling on the parent–ow!!–and if we didn’t stay, she was almost certain to get up and come looking for us.

Also, Daniel and I were sometimes forgetting one or another of the steps of getting her ready for bed, because we weren’t doing them in a consistent order and it’s easy to get distracted when anything unexpected happens–which is basically every evening in a household with not only a two-year-old but also an eleven-year-old sort of nutty inventor person…. 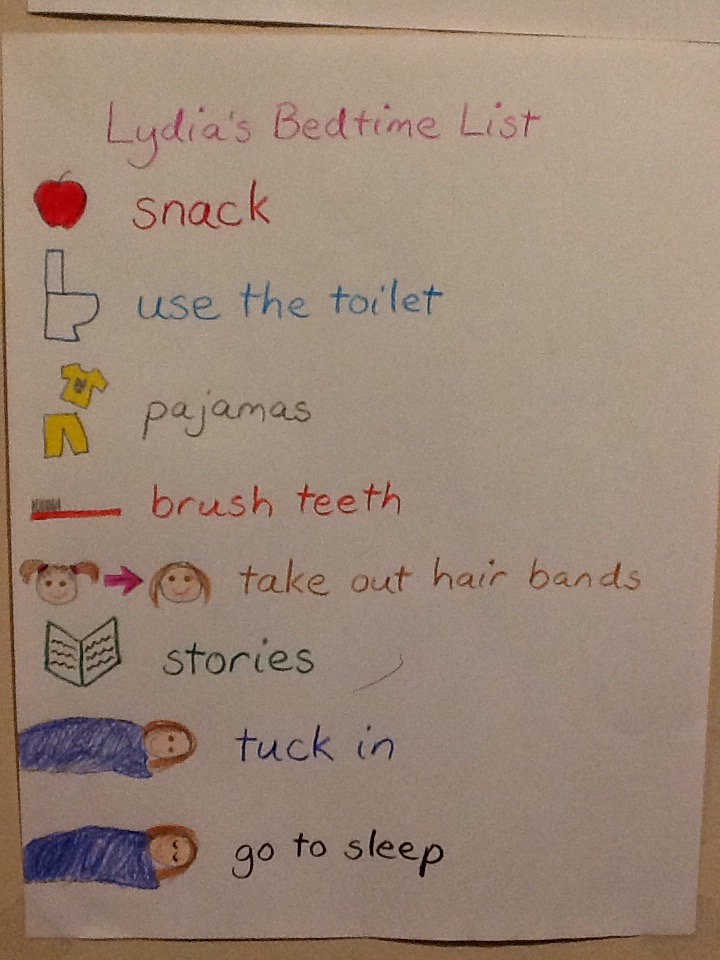 I decided it was time for a Bedtime List. This is an idea I didn’t try on Nicholas until he was five, the age when I remember having my first Lists.  My dad made me a Morning List and an Evening List showing what to do before kindergarten and after.  I loved following my Lists!

Nicholas has never been so keen on the Lists; he likes deciding what color each item should be and how it should be illustrated, but then he doesn’t want to look at the list and tends to argue about what should happen when.  Probably this is mostly about his personality compared to mine, but what if it would have worked if I’d started earlier?

Lydia is too young to be involved in making the List.  Her father Daniel and I went over what needs to happen in what order to make sure we agreed, and then I made this List using drawings that I thought she would recognize.

It’s working very well!  Lydia likes looking at her List, pointing out the steps and talking about them.  She’s more cooperative with the routine than she was before, especially if we get back on track after a distraction by saying, “Okay, what have we done on the List?”

A fringe benefit is that Lydia is practicing her pre-reading skills: “This red sign says eat snack!  This other red sign says brush teeth!”  Understanding that written words convey meaning is a very important step toward recognizing those words when you see them without pictures.

We’re still working on getting her to stay in bed by herself.  But at least she’s understanding more clearly that certain things are going to happen every night and that the sequence is supposed to end with sleeping.

Organizing a child’s routine with a list works for me, at least sometimes!

2 thoughts on “Bedtime List: How to organize a child’s routine”