I worked with crime data for 17 years, and occasionally someone would say, “Gosh, that must make you so worried about your safety!”  No.  It didn’t.  It had exactly the opposite effect.  There are four patterns I saw, over and over again, that made me feel safer:

I could write a lot about what I’ve learned and how it’s influenced my sense of personal safety, but at this moment in American history I need to focus on helping you understand how safe you are and who’s trying to mislead you.

Monday’s presidential debate included repeated ranting from Donald Trump about the number of murders and shootings in Chicago during the Obama administration, implying that Chicago has become more dangerous and that this is Obama’s fault.  Trump would like you to believe that America is a very dangerous place and only he can save you from hordes of dark-skinned killers.

Graph from factcheck.org based on FBI data. Click graph for full article.

“Almost four thousand” is an overstatement of the 3,624 homicides in Chicago since Obama’s inauguration, but 3,624 is still a lot of people, and as Hillary Clinton said, “One murder is too many.” Yes. But the fact is that murder is far less common in Chicago, and in the United States overall, than it was 15 years ago–and that was a big decrease from 20-25 years ago. If presidents are responsible for violent crimes that occur during their administrations, then by golly, George Bush Senior was the worst president ever!

And before anybody gets on my case about Bush-bashing, notice that George W. Bush was the president who presided over an enormous drop in violent crime.  Funny how Trump doesn’t mention that–because it would ruin his argument that crime is high and it’s Obama’s fault.

Homicides in Chicago also have declined during the 21st century so far, but the pattern there is even more striking: There was a big drop from 2002 to 2004, and since then Chicago’s homicide rate has never again gotten nearly as high as it was in 2003! 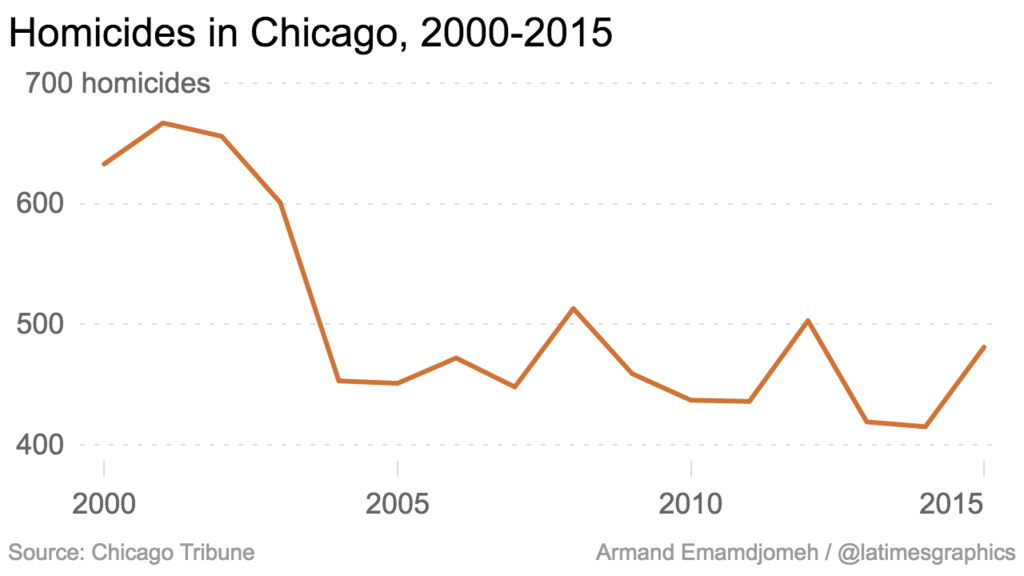 Every murder is a tragedy, and the prevalence of homicide among young black men is a horror that we must do our very best to control.  My concern is that Trump’s rhetoric makes it sound like America is getting more dangerous by the minute and like dark-skinned people are out to kill you no matter who you are, and this really isn’t the case.  83% of white murder victims are killed by other white people.  Those of us who are lucky enough to be white people living in safe neighborhoods should be concerned about the plight of black people in dangerous neighborhoods out of love and compassion, not out of fear for our own safety.  African-Americans face more risks than they should, but even they are safer now than they were 25 years ago.  Cities across the United States have made real progress in reducing crime, and it hasn’t been done by yelling, “Law and order!” like Donald Trump.

I could go on and on about crime prevention, too, but I’ll stick to telling you a little about what I learned from my own work on the book Young Homicide Offenders and Victims: Risk Factors, Prediction, and Prevention from Childhood.  I did all of the data processing and some preliminary analyses for this book, and I am a co-author of two chapters.  In this book, we studied the 37 convicted killers and the 39 homicide victims who were among the young men we had been interviewing since they were in elementary school, and we determined what predicted who would kill and who would be killed.  These are the nine factors measured when they were in elementary school that predicted which boys were more than twice as likely as the average boy to grow up to kill someone, in order of statistical significance with the best predictor first:

Think about those things when you think about how to prevent murder.  There are so many things we as a society can do to support families so they can raise good kids and to help kids when they first show signs of trouble–instead of waiting until they hurt someone and then throwing them in jail.

Gun control is a factor, too, and a major issue in the current election.  I agree with both candidates that we need to do more to get guns out of the hands of convicted criminals who aren’t allowed to carry guns.  My opinion, informed by what I’ve seen in crime research, is that the way to do this is to control guns much more tightly, more like we do cars: Carrying, using, or owning a gun should require a license, and to get a license you should have to demonstrate that you know how to use a gun safely and you understand the laws.  Each gun should be registered with the state and that registration updated annually.  These policies would help to reduce illegal selling and borrowing of guns.  It’s also my opinion that we should have fewer guns in the United States and work away from the idea that we “need” guns so much, but those are cultural and psychological shifts, not changes in laws.

I’ve learned a lot about crime.  It’s made me feel safer.  Donald Trump wants to talk about a few carefully selected facts as if they prove that we’re in grave danger and only he can help us.  I hope that looking at facts about the bigger picture helps you to understand how twisted his views are.

It works for me!

4 thoughts on “America is SAFER now than it used to be.”