For my latest article at Kitchen Stewardship, Kitchen Shortcuts for Busy Times, I needed photographs of at least one of the shortcuts, and the one I chose was cooking rice at the beginning of the week to use in three different meals.  Naturally, I found myself doing this at a busy time…which got busier…so that I ended up making the three rice-based meals on the last three days before the deadline and having very little time to take photos because everyone was hungry.  In fact, I forgot to take a photo of this dish until after we’d started eating!  And this isn’t a very good photo.  But this recipe, which we were trying for the first time, has such an interesting name and backstory that I decided to write about it over here rather than clutter the KS article–where it’s just the main dish that gets rice as its side dish. 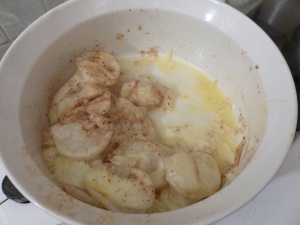 Okay, so what we have here are some baked turnips with cheese and seasoning.  This is the tastiest way to prepare turnips that we’ve ever encountered, and it was easy and quick to put together, with a short baking time.

I mean, it’s not as if we like turnips.  I don’t think we’ve ever bought them on purpose.  We just get them in our farm share and then have to figure out how to use them.  Typically, we’ve either put them in Japanese Udon Noodle Soup or roasted them with olive oil and herbs, and either way they are good enough that we enjoy eating them in that meal.  Then we’re done with turnips until the next ones show up.

Well, this autumn we received large bags of turnips two weeks in a row.  We made the Udon Soup, but that only used three large turnips.  We’d recently roasted various other vegetables and were feeling a bit tired of roasted vegetables.  Time for something new!

Daniel suggested, “They had turnips in Europe in the Middle Ages.  Let’s see what they did with them,” and pulled out two books of authentic medieval recipes.  Both of them gave the same basic instructions, which sounded plausible, so we decided to try cooking turnips by this method whose “odd name might be a way of warding off attacks by hungry diners in Rome’s busy taverns, but it only made the poor turnips more vulnerable!” according to Gillian Riley in Renaissance Recipes.

We agree that this tasty armor’s effect is the opposite of protecting the turnips.  Here’s what we did, based on the somewhat vague instructions in the cookbooks:

We highly recommend this approach to turnips!  They were sweet and tasty, complemented by the flavors of the cheese and spices.  It was a gooey, satisfying, filling dish.

4 thoughts on “Turnips Armored in Self-Defense”