I’ve explained how to use a box full of seasonal produce in a week when you’re cooking at home.  But what if you’ve received your CSA farm share, or a bountiful harvest from your garden, the night before you’re going to leave on a week’s vacation?  What can you do with all those fresh vegetables?! 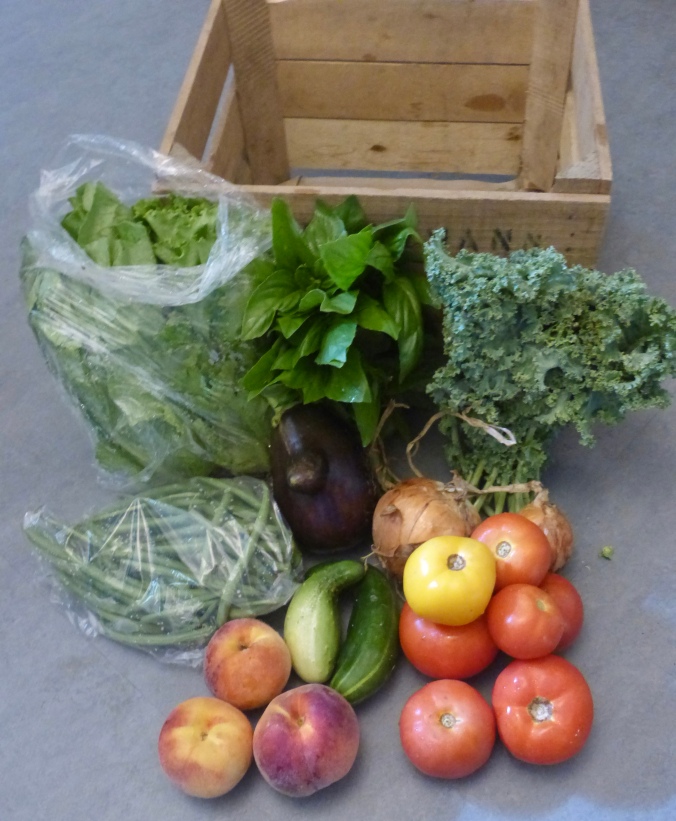 We used to have this problem every year when we worked for Looney Labs at a convention that ran from Thursday through Sunday–we get our farm share on Wednesday evenings.  Our approach then was to convert the veggies into a bunch of individual salads in plastic boxes, which we’d pack into a cooler and bring to the con.  It’s really wonderful, when your main source of food is a convention-center food court, to have the option of eating an organic salad!  It worked particularly well in the Looney Labs Big Experiment, where we had a volunteer break area where people shared food, including baking bread in a bread machine–fresh bread plus salad makes a great meal!

This year, though, we took a Thursday-through-Tuesday trip by airplane.  There was no way we were going to haul a cooler full of salads!  Anyway, we were going to visit my parents, whose enormous garden was sure to provide voluminous vegetables much fresher than ours would be after excessive handling and changes in temperature and air pressure.  We needed to sort last Wednesday’s veggies in a way that resulted in all of them getting eaten here in Pennsylvania.

Our approach to sorting veggies for vacation is based on the same 5 questions we ask about any other batch of veggies, but the answers are different.  We ask ourselves:

Question 1 was simplified this time because I have a friend who (a) eats a lot of vegetables and (b) had just given me all of her surplus veggies before she went on vacation the previous week!  I knew I could dump just about any vegetable on her. 🙂  That was much easier than going door-to-door or posting on For Sale Or Trade trying to find a taker for each individual vegetable, in one night, while we also were packing for the trip and trying to get to sleep early so we could leave for the airport at 4:30am!!

We now have two guinea pigs, who eat about two cups of raw vegetables per day and were going to stay home with our neighbor coming in to feed them, so we’d hoped that they could eat some of our CSA veggies . . . but the array we got was not well suited to their needs.  Their digestion is upset by too much lettuce or tomato or by the middles of cucumbers–they can eat cucumber peel.  So the only part of this farm share that went to the guinea pigs was the kale stems, and we bought celery and green peppers for them to eat while we were away.

Questions 2 and 3 had to be adjusted to account for the fact that we were eating only two meals between receiving our farm share and departing on vacation: Wednesday dinner and Thursday very-early breakfast.  Whatever we were going to eat in the near future would have to be eaten at those meals or packed for snacking on the plane.

Because we still had two tomatoes left from the previous week, we’d already decided to have roasted tomatoes over pasta for Wednesday dinner and then freeze surplus roasted tomatoes.  We could also have roasted the eggplant (notice, in the photo above, this eggplant’s cute nose!) and onions, but we decided against this in order to minimize our dicing and pan-scrubbing.  As it was, the tomatoes shown above plus the two left-over ones filled 3 pans.

Here’s how the 5 steps worked out this time:

Here are some ways we could have preserved some of the vegetables we gave away, if we hadn’t had an eager taker for them and we’d had more time to work on them:

It’s a great feeling to be eating fresh, local produce right up to the moment we leave the house (and even on the plane!) without wasting anything!

One thought on “Veggie Inundation Just Before Vacation? How to Cope.”