This year I’ve been helping with a local challenge to reduce single-use plastics.  My church hosted a screening of Plastic Paradise, a documentary I highly recommend for learning more about where plastic stuff goes when we throw it “away.”  Of course we wanted to serve some snacks to welcome people to our parish hall and encourage them to stick around and talk after the movie.  Of course we wanted our snacks to create as little garbage, especially plastic garbage, as possible.

I wish I had better photos, but there’s a good reason I didn’t get them: The room was crowded with the 80+ people who came to see the movie, and most of them were excited to get some snacks!  There was a crowd around the table, so I hurriedly snapped a couple pictures toward the end of the evening.

This is all the plastic trash discarded in the process of making and serving refreshments for 80+ people: 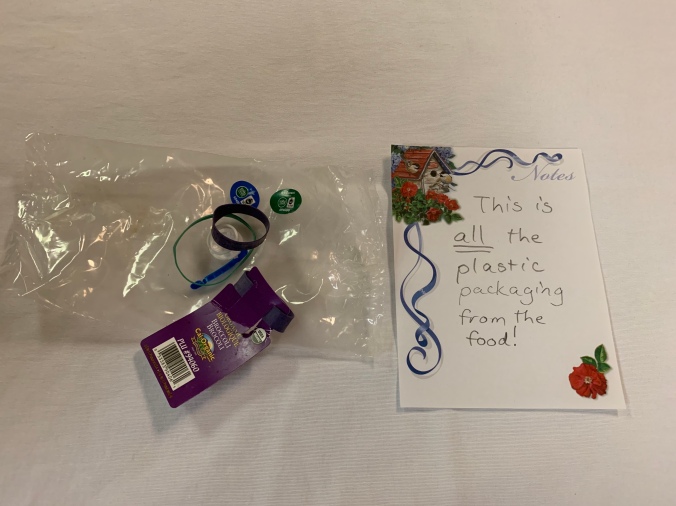 Here’s what we served:

This was easy.  I thought up a menu–based on my extensive experience serving coffee hour–that would offer a variety of savory and sweet, plant-based food that we could obtain without a lot of plastic packaging.  Then we just had to put a little effort into choosing the specific options with the least plastic.

Making hummus by cooking dry garbanzo beans is the big thing I did here that I wouldn’t normally do.  Instant hummus mix from the bulk section is quicker and easier when you have it on hand, but I didn’t; what I had were dry garbanzos that were not enough for another batch of slow-cooker chana masala, so I used those and other things I had in the house and a lemon from the store I walk past on my way home from work, instead of driving to the co-op!

Cooking the dry beans took a long time, but it wasn’t difficult.  On Saturday (two days before the event), I poured them into a pot, covered them with water, put the lid on, and put the pot on the stove on high heat.  Then I started washing my dishes.  When the water boiled, I turned down the heat.  After washing dishes, I made lunch.  After eating lunch, I checked the garbanzos and thought they were almost soft enough but not quite, so I turned off the stove and left them there, soaking in hot water.  Four hours later, I threw them into the food processor with the rest of the ingredients, and the hummus turned out fine. 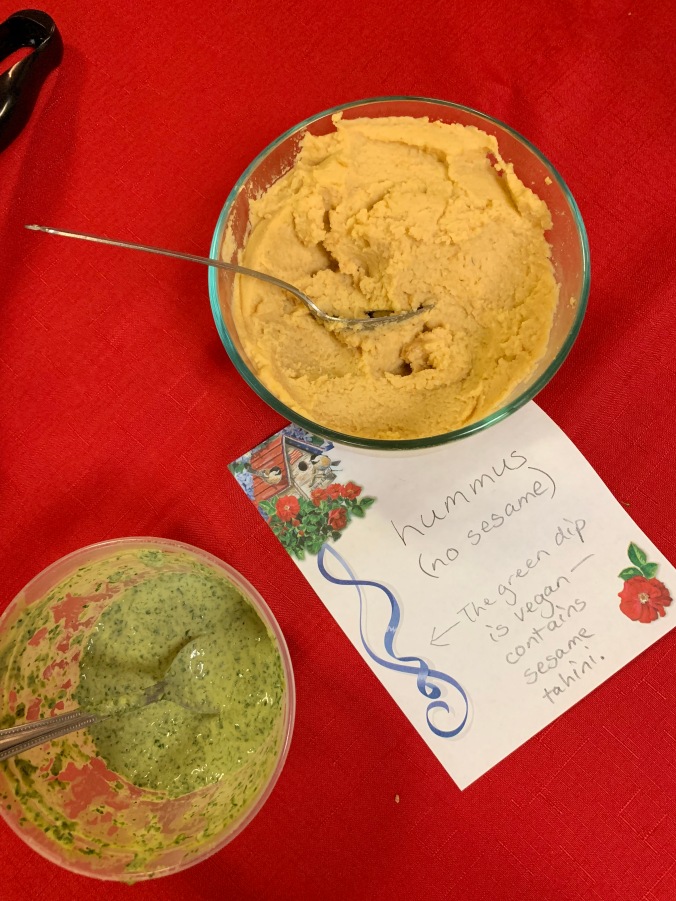 Jennie made the green dip with parsley, cilantro, tahini, garlic, and stuff. It was more popular than the hummus because I forgot to get the hummus out at first (and then I had trouble getting through the crowd!) and the green dip originally was in the center of the veggie tray.

So there was some hummus left over, and I put it out at coffee hour the following Sunday (along with the leftover lemonade), and then I scraped the last dregs into a reused Chinese takeout soup container and put them in my freezer for later.  Freezing is a good way to store hummus that has been sitting open on a table with a bunch of people dipping into it–freezing kills germs and mold, whereas if you put that exposed hummus in your refrigerator, it tends to get moldy after just a few days.  When you thaw it and then mix it up, it tastes and feels just the same as when fresh!

It’s always a good idea to make some little signs about ingredients that are common allergens or dietary restrictions, so that guests know what they can eat.  Some people who are allergic to nuts are also sensitive to sesame seeds=tahini, so that’s why I made hummus without tahini.

Why were our refreshments vegan? A committee member suggested it as another way of minimizing environmental impact: Plant foods on average use fewer resources than animal foods.  I was happy to agree because the dairy foods I like to serve for refreshments–cheese, sour cream or yogurt for dips–all come packed in plastic!  Nearly all meats are in plastic packages, too.  It was actually easier to minimize plastic once we’d ruled out meat and dairy!

The other important elements in our success are making things instead of buying them ready to eat, bringing refillable containers (jars for bulk food, and produce/cookie bags) to stores that would allow us to use them, and washing dishes.  All of these things take a bit more work than walking into the store empty-handed and walking out with a plastic tray of pre-cut veggies, a plastic tub of dip, cookies in a plastic tray wrapped in plastic, a big plastic bag of pre-popped corn, and plastic bags full of plastic plates and cups . . . but honestly, it wasn’t that much work!  (I especially appreciate Joe’s demonstrating that you don’t have to bake the cookies yourself to avoid the plastic.)

Why not challenge yourself to make a party or a family meal with as little plastic trash as possible?  I’d be happy to hear about your experiences, both the successes and the bits of plastic you can’t avoid!

Plastic is so prevalent in food packaging these days that I’m finding groceries are the largest source of plastic garbage in my home.  Katie at Kitchen Stewardship agreed and asked me to write an article exploring alternatives to some of the plastic-packed food she’s been buying.  Check it out!

2 thoughts on “Party Without Plastic! How to serve less trashy refreshments”