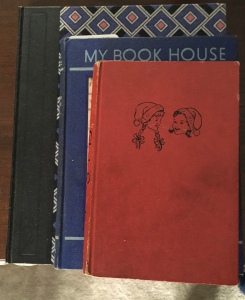 Starting a new year, especially a new decade, always makes me want to look back at what’s changed.  I also love reading books to my kids that I and/or other relatives enjoyed when we were young.

Here we have a book looking back at the 1920s that belonged to my paternal grandparents, a book that both my mother and I (and our siblings) enjoyed as children, and a book from my children’s other grandmother’s childhood that I’d never read before.

This Fabulous Century covers 100 years with one book for 1870-1900, then one book per decade through the 1960s.  The set was in my grandparents’ living room, where I enjoyed traveling through time and asking my relatives if they remembered some of the things depicted.  I claimed the books after my grandparents died, and I spent New Year’s Day in 2000, 2010, and 2020 looking back a century.

Well, the cars were different, and everybody wore hats a lot, but the world of the 1920s doesn’t seem so long ago!  Chain stores, buying on credit, influencing consumers by tying product endorsements to entertainment, money-transfer fraud, pyramid schemes, manipulative advertising, dumb movies featuring sports stars, sensationalist media coverage of murderers, motorcycle cops, and motels were phenomena spreading nationwide.  Teenagers wore stupid fashions just to be different from the old fogies.  Fraternity hazing and alcohol poisoning were serious problems.  United States highways were identified by shield-shaped signs and state highways by round signs.

On the other hand, women wearing swimsuits that look modest by today’s standards got arrested for indecent exposure.  Fingernail inspection was part of every school day.  The cutting-edge cinematic special effect was sound–late in the decade.  The gotta-have tech was radio; the very first commercial broadcast was in 1920.  Airplanes and refrigerators were very new.  Alcohol was illegal, not that many people observed the law.  Magazines, mah-jongg, and crossword puzzles were extremely popular.  The Miss America pageant was new, and they clearly did not have the kind of hair products used today, and somebody dressed as King Neptune was involved.

This book is a fun look back at one of the decades that made us what we are today!

Through the Gate of My Book House, edited by Olive Beaupré Miller, 1937 edition, first published in 1920

Maybe the title is properly written My Book House: Through the Gate, but I’ve always liked the idea that this fourth book in the My Book House series opens a gate leading to yet another house filled with stories, poems, and pictures.  (See the first book here.)

This was the only book missing from the set we inherited, and then I found this one at a used-book sale! I remember it from my childhood (another set of My Book House is still on my parents’ shelves) and it’s fun to re-experience it myself as I read it to my 5-year-old Lydia.

This volume is mostly fairy tales and tall tales, interspersed with poems on related themes, a few educational bits like a detailed description of a traditional Russian Orthodox baptism, and Olive Beaupré Miller’s original story of a kitten who sneaks out on his own on Halloween.

We start off with a classic telling of Cinderella, with details like “I shall put on my gold-flowered mantle and my splendid diamond stomacher.” Then a Norse folktale about a magic doll who rides around in a silver spoon pulled by white rats and a bullied youngest brother who gets the best wife in the end. “The Twelve Dancing Princesses” has awesome world-building–an underground kingdom with diamond-leaved trees!–but wraps up without adequately explaining anybody’s motivation or future except that of the invisible spy prince. I remember lying awake after this bedtime story trying to figure out how it resolved for the rest of them. 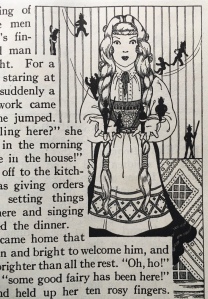 We also get “Elsa and the Ten Elves,” in which a lazy housewife learns an effective hallucination; “The Selfish Giant” by Oscar Wilde; “The Little Snow Maiden” who cannot be tucked up under a blanket but will play by herself in the yard all night [NOTE: not a good bedtime story!]; “The Girl Who Used Her Wits” and her origami skills to defeat her unreasonable mother-in-law; many other mostly European folktales; and a string of seven short stories about Nutcracker and Sugardolly that I’m relieved Lydia doesn’t want to read because I remember them as unbearable in some way.

“A Thanksgiving Day from the Bible” is presented as a story of long ago without acknowledging that Jews still keep this annual feast and it’s called Sukkot. So, I said to Lydia, “This story is like a riddle. See if you can guess which holiday it’s talking about.” She couldn’t remember the name of the holiday, but she knows that there’s a time in the fall when some people in our neighborhood build a booth and eat dinner in it, that holiday, one of the things that happens each year in our time and in the time of this book and in all the years in between.

One story I’m not going to read in 2020 is “How Brer Rabbit Met Brer Tar-Baby” written in such extreme dialect that it’s like a secret code, and if you do manage to pronounce it it’s probably an offensive caricature, and anyway this is a story of animals being cruel and vindictive to one another–who needs it?

The story of Doctor Dolittle and the Pushmi-pullyu is more my kind of thing than the classic tall tales–Paul Bunyan, Pecos Bill, a giant pirate–but sometimes crazy exaggeration is entertaining. Johnny Appleseed is more my kind of hero, and the version of his story in this book is pretty well balanced between his eccentricities and his helpful nature and spirituality.

I guess I never got all the way to the end of this book as a child, and I think I’m going to skip it with Lydia, because “The Pert Fire Engine” by Gelett Burgess is a very disturbing story from the perspective of the #metoo era.

Overall, though, Through the Gate is a treasury of stories that today’s kids will appreciate just as much as children a century ago.  We’re not really so different!  I remember this poem reassuring me with proof that other people have the same sort of ideas that sometimes cross my mind:

My partner Daniel’s mother is named Elsa, so of course she’s always been drawn to books and movies with characters named Elsa–and it’s not a common name in the United States.  This book from her childhood turns out to be a sweet little suspense novel very well aligned with the concerns and reasoning skills of young children.  It reminds me of Beverly Cleary’s writing in the way it explains the protagonist’s thoughts.

Seven-year-old Elsa lives in a small town in northern Minnesota where the school principal is planning a Snow White operetta.  Although Elsa loves to sing and act, the principal insists that a black-haired girl must play Snow White, so she gives the role to Elsa’s best friend Margie–until Margie becomes unsuitable.  Then blond-braided Elsa gets to be Snow White–if she can avoid suffering the same fate as Margie before the performance, and if she can prevent anyone from finding out just how close to that fate she is!

It sounds terribly scandalous, doesn’t it?  But it isn’t: The kids are dealing with a totally normal developmental stage, and it’s their principal’s intolerant perfectionism and lack of boundaries that causes all the trouble.  (She ultimately apologizes for some of it.)  Elsa works herself into a state where she’s visibly distressed and barely eating, and all she’ll tell the grownups is that the thing that’s bothering her has to be kept secret but she’ll tell them after the operetta.  Her father decrees that everyone must stop interrogating Elsa about what’s wrong and just let her be.  That helps, but it’s still a very tense few weeks!

Meanwhile, there’s a blizzard with temperatures 50 degrees below zero–not that they close school or anything, in that town!–and other plot wrinkles creating a cliffhanger ending for literally every chapter.  Lydia and I had trouble putting this book down, and we read the whole thing in two days!

Read other writers’ book reviews at Quick Lit and Show Us Your Books!